From Schneider to Campillai: the new faces…

The other elections: what happened in the…

Boric: “We have to be humble and…

Kast and Parisi both ‘winners’ in Chile’s…

Chile on the verge of the most…

CURICÓ – This week, two Chilean policemen in Curicó were attacked by a civilian. An incident as violent as this against the police does not occur too often. Chile is a safe country, not only for policemen but for tourists and Chileans as well. 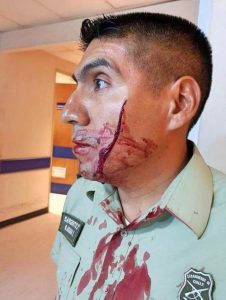 Upon their arrival, they started questioning a woand slashed his face.

The officers ultimately subdued and arrested the attacker, and Molina was later taken to Carabineros Institutional Hospital in Santiago, where he received first aid, including 37 stitches.

Crimes against Carabineros such as these are rare, but they happen from time to time. In 2016, a movement called “No More” was created, asking for a bill that establishes life insurance for Chilean officials who are victims of violence. The movement started marches when two sergeants, Hans Knopke and Luis Díaz Manríquez, were assaulted by four minors who stole a car in Ovalle, La Serena.

Immigrants, tourists and businesspersons choose Chile because the crime rates are lower than in any other Latin American country.

Numbeo.com reported in January 2019 that this Latin American country has “high” and “moderate” rates of safety, especially in the southern and central parts.

Similarly, according to the 2017 Public Safety Report of the U.S. Department of State Travel Advisory, the security environment in Chile is considered moderately safe, with comparatively less violent crime than in other Latin American countries.

Pickpocketing, telephone scams, vehicle thefts, and residential break-ins are the most common crimes. Violent crime also occurs, most often in the form of carjackings, home invasions, and muggings; however, express and traditional kidnappings and random shootings are almost non-existent.

Mohammad Arafat, 26, is a graduate of the Islamic University of Gaza, where he studied English. He aspires to become “a voice for people, expressing their hopes and pains, helping them pursue their dreams in the face of adversity and demonstrating that every life matters.” A freelance writer, Mohammad already has self-published his own book, “Still Living There,” which he disseminates through Amazon.

Thousands Of Chileans March In Santiago On Labor Day

Will Chile choose between a Christian Democrat and a Communist?