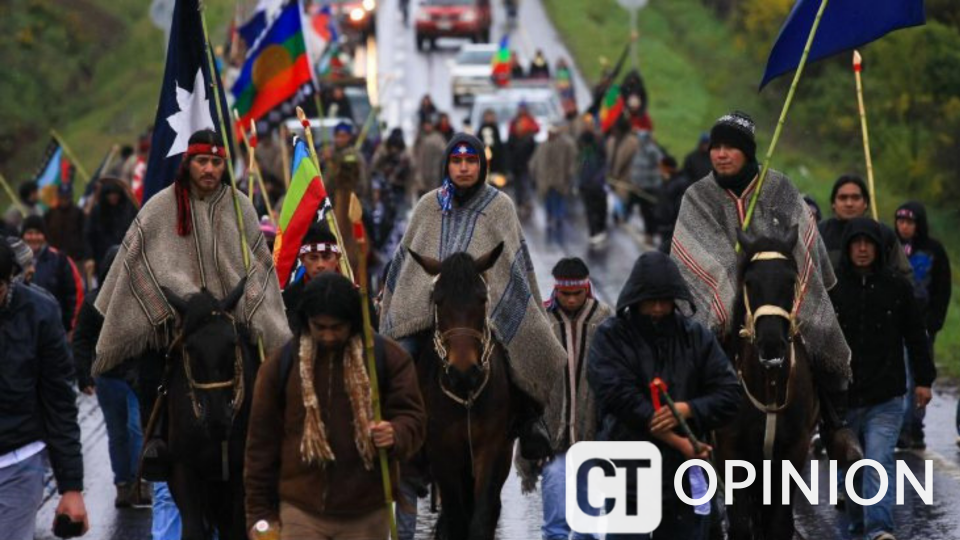 With the arrival of the new Interior Minister, Víctor Pérez (UDI), the already intense Mapuche conflict shifted into a very complex stage. The same day the former senator took office, he indicated that this issue would take priority. And to make his position clearer, his first field visit was to La Araucanía, where tensions escalated further.

Pérez has insisted that Chile does not have political prisoners. He also made a risky call to the mayors of seven municipalities to clear the municipal buildings Mapuche community members had occupied to request the freedom of more than 20 of their own, incarcerated in prisons in the area.

That same night and amid a national curfew, a group of armed civilians and in front of the complacent gaze of police forces, took justice into its own hands and cleared the Curacautín municipality building. The action has brought to mind similar groups from one side or the other, including Patria y Libertad or MIR, that acted during the Unidad Popular government. Back then, they also systematically violated the rule of law, instilling a feeling of ungovernability and fueling the 1973 coup d’état. The reemergence of such groups is an unprecedented phenomenon since the return to democracy 30 years ago.

Other evictions, executed by the Carabineros police force, followed. These included the destruction of a camp set up by Mapuche women in front of Angol prison and the arrest of a Jesuit priest who defended community members that had taken over another municipality building. This occupation was repressed only a few hours after the fact.

Although the conflict has lasted for decades, this time the political atmosphere, the effervescence that was unleashed after the October outburst – which is clearly back – has added to a climate of polarization. Division has become clear in seemingly unrelated debates, for example around the 10% pension withdrawal bill, but is also reflected in a weak government. These developments suggest that we could be reaching a breaking point.

Perhaps, the difference with other tense moments is that “a tough among the tough” is in charge of security. Pérez was appointed mayor by Augusto Pinochet, and he was friend and defender of Colonia Dignidad leader Paul Schäfer. In Schäfer’s enclave, bodies of people executed during the dictatorship appeared. He was an accomplice in human rights violations and later accused and tried for sexual abuse of minors.

Pérez was also a staunch critic of former president Michelle Bachelet, for, according to him, her mishandling of the Mapuche issue. His criticism was on the verge of insult. He even suggested solving the conflict in La Araucanía implied a military intervention.

But as a Chilean adage (roughly) goes: actually “playing the guitar is another thing.” The minister had to tone it down and repeat the story all of Chile’s presidents have told over the last decades: 1) we are for dialogue; 2) we do not accept talks under forceful conditions; and 3) we will comply with the law as it is regarding the imprisoned community members’ request to convert prison sentences into house arrest.

Yet, events have proved that the prevailing criteria are political. The day after the new phase of the conflict began in Curacautín, the president pardoned two inmates of Punta Peuco – the luxury prison purpose-built for those convicted of having committed human rights violations during the dictatorship.

However, the main risk that emerged in recent days is the position taken by the truck driver union. Members have had it with getting attacked, and their trucks being burned along the highways and roads of La Araucanía and Biobío regions. They gave the government an ultimatum to solve the security problems – impossible right now – otherwise they would go on a national strike.

Three paradoxes have surrounded this new crisis for government palace La Moneda. First, while the leaders were meeting in La Moneda, hundreds of trucks were traveling through Santiago, while others were blocking the crucial Ruta 5 Sur highway. So the government apparently does talk with unions under forceful conditions. The Mapuche lonkos (leaders) are paying attention to this double standard.

A second paradox concerns the threat of a national strike coming from union leader José Villagrán. He is a former senate candidate for UDI party, which has dominated the cabinet since the last adjustment. Even more so, it’s the party of the interior minister.

And third, the truckers again threaten the strike. This brings back memories of the great October strike of 1972, which marked the beginning of the end of the Salvador Allende government and the trigger for the coup.

Such are the turns of life and history.

Today the right is in power, the same sector that promoted and even financed the strike of the 1970s. It must confront a union that has always had the power to paralyze the distribution of food and supplies right in the middle of a pandemic.

Without a doubt, a solution to the Mapuche conflict is even further away than it was a few weeks ago. Worse, there may be a turnaround with incalculable consequences. The murder of Camilo Catrillanca in late 2018 by Carabineros already provided a glimpse into this scenario. His death sparked the uprising that we have been observing ever since.

25O – Iona Rothfeld: “This system was built to fail us”

The Health Minister’s “Catastrophe” Has Arrived

At least 26 people have died as a result of the raging fires in the south of the country. Approximately 270,000 acr… https://t.co/s7exEKYm71

Reply Retweet Favorite
On Feb. 6, a video surfaced of a man pulling a gun on a Santiago Metro train. It shows him arguing with passengers,… https://t.co/BVaPmtEEEt

Reply Retweet Favorite
So says the Undersecretary of the Interior, Manuel Monsalve. “The law is particularly harsh …. The penalties range… https://t.co/mqpPf8aIBg

Reply Retweet Favorite
Almost 1,000 people have been injured, and another 1,800 have sought refuge in shelters in regions Ñuble, Biobío an… https://t.co/rmLJmdyzG3