Christmas in Chile: decorations and traditions

SANTIAGO – Titled “Piñera Owes Us”, Amnesty International in Chile released a report last Thursday criticizing the current administration for violating human rights. In nearly all areas, the government gets the qualification of being “in debt”. Members of the government responded surprised by the findings from the report.

“Piñera Owes Us”. “Give Him The Bill”. “In Debt” with human rights. The report as released by Amnesty International on Thursday pulled no punches and presented an unusual sharp view on the current government’s stance on human rights.

The Chilean government falls short in nearly all areas analyzed, according to the NGO. The “bill” as presented to the Piñera administration is categorized in three: in the first category, the President’s debt increased, in the second category his debt perpetuated and in the third category, Piñera paid his debt with human rights. 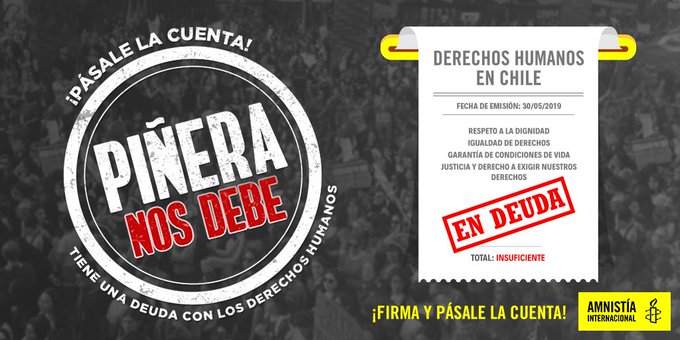 The Report: The Increased Debt

The list of violations that made the government’s debt increase according to Amnesty International extends to ten topics. An example is the decision to not sign the Treaty of Escazú, a treaty that obliges countries to take consultations from citizens before making a decision on a project that could have an environmental impact. Also, the protection of environmental activists falls under this treaty.

Another subject is the withdrawal from the government from the Global Migration Pact. Just hours before world leaders gathered to sign the UN migration pact, Chile pulled out, a decision that surprised many. The creation of the “Jungle Command”, the elite forces responsible for the death of Mapuche man Camilo Catrillanca, and the use of the Anti-Terrorist Law get criticized and security measures such as the Identity Control-law for minors, the “Safe Streets-project” and the controversial “Aula Segura”-law are also listed.

The Report: The Perpetuated Debt

On legislative areas that haven’t advanced or worsened, Amnesty International lists nine points, starting with what the organization calls the “poor protection of the LGBTIQ + community”. An example is an attack that took place on Valentine’s Day, when a young woman suffered an alleged homophobic attack and found herself hospitalized with severe injuries.

Other violations from the government are found in the fact that the individual and collective rights of indigenous peoples are not recognized (yet) by this government, that Chilean children still do not receive comprehensive sexual education and that no measures have been introduced to prevent and punish the excessive use of force by policemen, for example during marches.

Amnesty also finds a debt in environmental matters, inspired by the events that happened in Quintero, where over a thousand citizens were hospitalized with intoxication symptoms after inhaling toxic clouds from nearby industrial complexes.

The Report: The Decreased Debt

In two areas, the government did well, reads the report. One of them is the Gender Identity Law, a law that took five years to get through Congress and that allows people over 18 years to change their gender in their legal documents. Minors over 14 years are allowed to do so with authorization of their parents.

When responding for the first time, Interior Minister Andrés Chadwick hadn’t read the report. Nevertheless, he described the paper as “biased and strongly ideologized”.

“I have not been able to read the official report. I only have the press information. But I think it is a biased report, misinformed and strongly ideological. It is lacking the truth”, the Minister said according to El Dinamo.

On Friday, the Ministry of Justice released a statement, acknowledging their surprise: “We are surprised by this report. It lacks objectivity and has ideological bias. As a government, we expect a frank but constructive tone, as in the annual reports traditionally published by Amnesty”.

Editor-In-Chief Boris van der Spek is the founder of Chile Today. He worked in Colombia, Surinam and the Netherlands as reporter and works with international media during major events, like the social crisis, the elections and the Pope’s visit.

Cuenta Pública: Seven Promises From the Chilean State of The Union

Group C: Players Who Will Surprise You During Copa América 2019

Preventive State of Emergency Until 2021 to Curb Forest Fires

🗣️Having won the national football tournament four-years in a row, the university football team already has its sig… https://t.co/JFrC4eNfy0

Reply Retweet Favorite
🗣️Governor Claudio Orrego made the announcement while urging residents and businesses to reduce their water consump… https://t.co/GopJX5YZrH

Reply Retweet Favorite
Truckers claim that in 2020 the administration asked them to strike as pressure to pass the Juan Barrios Law. The c… https://t.co/odgcQ5FxHg

Reply Retweet Favorite
🗣️The president of the Upper House was caught muttering about the difficulties facing the incoming administration.… https://t.co/VtPhf6DbgW